The Dodecanese Island cluster lies in a crescent chain along the Asian-Turkish coast curving west towards Crete.

The name "Dodecanese" came into use in 1908 when twelve islands of this group excluding Lipsi, Kos and Rhodes but including an outsider, Ikaria, protested about their deprivation of the special privileges and tax exemptions they had been granted in the 16th century by the Turks.

Like most of the Greek Islands, the Dodecanese are the tops of mountains that stood on the plain of the Aegean before they were flooded.

The islands are for the most part bare of vegetation although not to such an extent as the Cycladic Islands. Several are abundant with natural springs, especially Kos and Rhodes (Rodos), which are also relatively green and wooded.

In the summer, the prevailing wind is the "Meltemi" which comes from the NW-W. It begins to blow in June, strengthens from July to September and weakens in October. In the summer months it blows with a wind force of 4-6 Beaufort and may on occasion reach wind force 7.

It does not blow every day, but may do so without break for 5-10 days. When the "Meltemi" blows at full strength, mainly in July and August, the gusts off the lee side of an island can be considerably stronger than those in the open sea. Gusts are particularly strong off Patmos, Kalymnos, Kos, Nissyros, Tilos, Karpathos and Astypalea.

In open sea between Astypalea and Karpathos, the "Meltemi" may blow for days on end. Although it is possible to travel N when the "Meltemi" is blowing, it makes better sense to head S, especially in July and August. The typical short seas make sailing or motoring to windward arduous and tiring.

Experience this sailing trip from a choice of bareboats, catamarans, motor yachts, sailing yachts and all varieties of vessels for your unfogetable sailing in Greece experience.

More info about the Dodecanese Island

The well-known "Meltemi" is blows during summer from the NW-W. It begins mid June and continues till mid October. It blows strongly in the months of July, August and September reaching a wind force of 7. In spring time it is mainly SE and not very strong. During the winter it usually blows SE and sometimes N or S.

During the "Meltemi" time, especially in July and August, the gusts of the lee of the islands of Patmos, Kalymnos, Kos, Nissiros, Tilos, Karpathos and Astypalaia can be very strong, even if the wind in the open sea is not strong. The temperature in the summer may reach 35° C, although the average temperature is less. 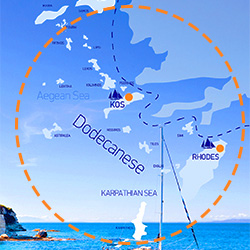