Corfu Island – A Dream of an Empress

Definitely a holiday destination for the art lovers, Corfu boasts a vibrant cultural life, with many museums, a university, libraries and festival throughout the year. On top of that, the setting of the old city makes it a favorite for yacht charter in Greece, a fact also illustrated by the numerous marinas that can be found here.

Part of the Ionian group of islands the island is located, where else, but in the Ionian Sea, off the western shores of Greece, right near the mainland, with its northern tip reaching into Albania. It’s the second largest island of the group and also one of the most popular when it comes to Yacht Charter Greece tourism.

The name is actually a corruption of an old Byzantine word that meant “city of the peaks”. The overall shape of the island is that of a sickle, with the concave side having the most important ports, like Corfu town, well known by the yacht charter community. The 588 km2 of the island are split between two high mountain ranges, making the northern part the highest, the central a hilly region while the southern takes on the appearance of a coastal plane. 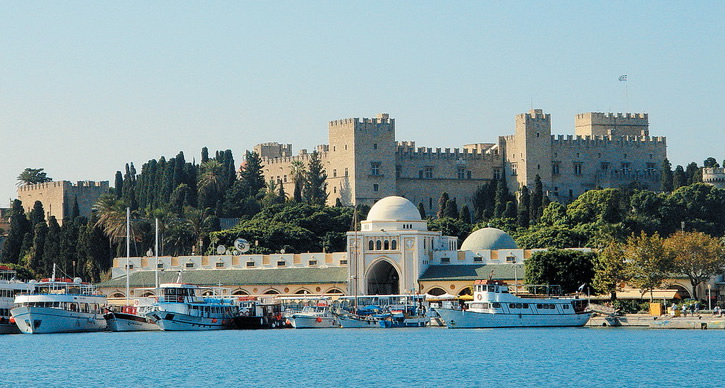 The coastline is 217 km long and it variates from high cliffs in the north to sandy beaches in the south. There are numerous promontories and two big bays, Corfu and Gouvia which are lined with marinas for yacht charter enthusiasts.

The vegetation of Corfu is very simple and in many ways is similar to the one in mainland Greece. Olive trees seem ubiquitous, together with the grape vine, fig trees and pomegranates. There are also small patches of pear and apple trees. Added sometime in the past were more exotic fruits trees like the prickly pear or the banana. There are some wild Mediterranean species that are widely known, such as the myrtle or the holm oak which grow in the wild parts of the island.

The weather in Corfu makes it possible for yacht charter holidaymakers to visit its shores all year round. Winter, though with temperatures ranging between 5 and 15 degrees is sunny and wet. Spring is definitely a season to visit Corfu if you love the Mediterranean. This is the time of year when most plants are in bloom creating wonderful symphonies of aromas and the temperatures reach a lovely 25 degrees. Summer is when most of the visitors arrive, with the sun reaching its full potential, daily temperatures exceeding 30 degrees and mostly sunny days. In autumn, most of the trees bear fruit and showers are more frequent bringing with them winds from the Albanian shores.

The most important town on the island remains Corfu Town, which has been a strategic trading point for many civilizations, starting with the ancient Greeks, continuing with the Romans and the Venetians. The latter were removed by Napoleon Bonaparte who then claimed it for the French, only to be replaced in turn by the Turks and the Russians. The return to Greece happened very late, after WWII, but now the island’s economy is booming, becoming one of the country’s premier resorts.

Today, the island is also famous for its university and the culture-rich environment, which would explain the great number of libraries and museums, the numerous festivals and theaters which have taken the locals’ traditions and transformed them into a celebration for the visitors.

The sailing around Corfu and indeed around all the Ionian Islands is quite refreshing and easy. Lots of anchoring places in between the numerous capes and bays of the irregular shores, fair winds for most of the year (especially during the high season), lots of line of sight sailing and many itineraries to fufill even the most insatiable.